I’ve been MIA for a bit and a huge part of that goes to starting my new job and being literally exhausted ALL THE TIME. My energy is back up now and I have my body and mind accustomed to the new pattern so I’m ready to dive back in! I combined the August and September book lists because my reading these past 2 months has been atrocious.

In August I read 2 new books, got distracted by life and then re-read the entire Harry Potter series. In September, I finished the HP series and then finally picked up something new last week. I’m not going to review the HP series because it’s so well known. All I can say is if you haven’t read the books, they should be next on your list!

#1  True Believer: James Reece #2 {Jack Carr} B+ A fantastic follow-up to the first book in the series, this one follows Reece to Mozambique where he works on healing himself and protecting the local wildlife from poachers. The CIA hunts him down and recruits himfor help in unraveling a terrorist plot in exchange for a Presidential pardon and immunity for those that helped him. There’s a lot of action going on and the book sets up the series nicely for many more stories to come.

#2  The Nowhere Child {Christian White} C This book sounded like it was going to be a great thriller/mystery but it fell flat for me. Kim is living in Australia when she is contacted by an American who is convinced she is Sammy Went, a girl from America who disappeared and/or was kidnapped 26 years earlier. After proof is presented to her that she really is Sammy, Kim heads to America to reunite with her old family and figure out what happened. There are a lot of flashbacks to highlight the events that led up to the disappearance as well as tell the story of the other characters. There was a huge faith factor throughout the book, but it was of a sinister cult-like faith. All in all, I didn’t find very many likeable characters for me and I found the story meh.

#3  The Broken Throne: Red Queen #4.5 {Victoria Aveyard} B This book is actually 5 novellas published in 1 book. The first 2 – Queen Song and Steel Scars – serve as prequels to the Red Queen series. Queen Song tells the story of Queen Coriane (Cal’s mother), her courtship with the prince and her eventual demise. Steel Scars goes behind the scenes with Farley and her rise within the Scarlet Guard as well as her recruitment of Shade Barrow and eventually his sister. The rest of the book focuses on other characters during and after the war, plus a conclusion for Cal and Mare. I wouldn’t say this was fantastic but as I didn’t like how the last book ended, I enjoyed reading about how everyone moved on and/or came together finally.

My goal is to get back into reading this month despite all the other projects we have going on at the house. I may try some audio books to help pass the time on my commute. Any book recommendations to send my way?!? 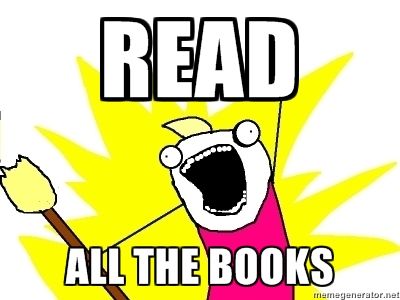