The past 4 months with Baby B (aka Declan!) have been a whirlwind. The first month was HARD, especially once Kenny went back to work full-time and I was home by myself. There were times that my mom would come over just so I could nap and/or shower while she watched Declan. The only times I really left the house were to take Dec on walks around the neighborhood and getting dressed really meant going from my pajamas to leggings.

I am happy to say we are light years away from where we were month 1&2! Dec started sleeping through the night around 3 months and will typically wake up between 5:30-6:30am. He’s more engaged in his various toys, loves his morning walks with Grandma, and his 2 favorite things to stare at are ceiling fans and anything outside.

I’ve been slowly figuring out what items have been crucial to us and what we barely used at all!

Most Used Products for Months 1-2

We stopped using the swaddles once Dec hit 8 1/2 pounds and then just gave up on swaddles in general. The nightgowns we phased out around month 3 as he grew out them and we only use the Snuggle Me sparingly (I mostly keep it in the bassinet during the day to keep the cat from sleeping directly on the sheets!)

Most Used Products for Months 3-4 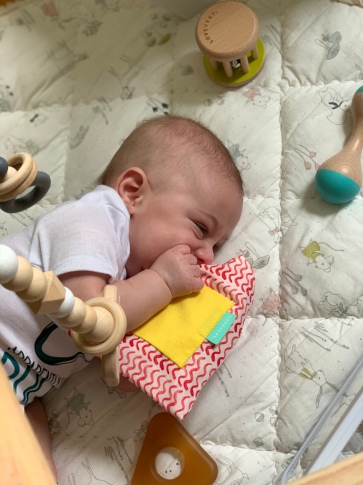 In addition to all these products, we also have a play-kit subscription from Lovevery. I’ll dedicate a longer post to that and the other specific toys that have become favorites but for now I definitely recommend anyone with an baby or toddler to check out their play-kits!