We’ve been in our house for close to 7 months now and there has been a slow progress on updates and renovations. With the house being so old and not well cared for, a lot of the work that needs to be done is expensive and we have to space out our projects. 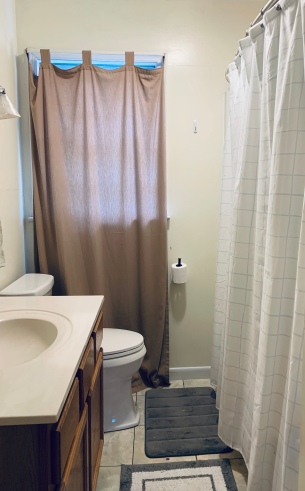 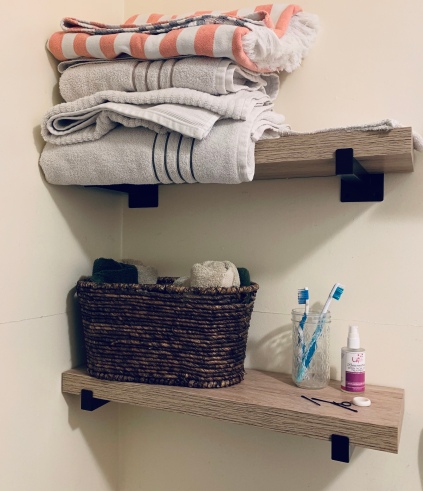 The first thing we did was install a new toilet in the bathroom on the main floor. That was one of my non-negotiables that had to be done IMMEDIATELY. The old toilet was absolutely disgusting and half broken and definitely not something I was going to be sitting on! The entire bathroom needs to be redone but that’s on the back burner because the current one is livable and renovations are not in our budget. We’ve been able to do small things to make it more manageable (it’s TINY) and those should tide us over for a while – 1) install a curved shower curtain rod to make the shower space larger. 2) install floating shelves for towels as a standing shelving unit would make the room seem even more crowded. 3) install a toilet paper holder and towel ring! Both of those items were consistently sitting on the sink or back of the toilet and just taking up valuable space.

The things that have been placed on hold include – new flooring, new window with tempered glass, new sink/vanity and mirror, update the wall/ceiling colors, install a new shower/tub unit and update the piping. So basically we need to gut the whole thing!

The next update was the office. I painted the walls over my holiday break and have been utilizing the room as my office slash dressing room. A deeper look at this room is linked here: welcome to the office.

We’ve also been able to paint both main hallways from a dingy brown to a bright white. The color change has made the areas look so much brighter as well as cleaner. The hallway to the bedrooms and bathroom does not get any natural light so the white has really helped bring more light to an otherwise dark and dreary spot.

We did our first big reno with contracting Window World to install new windows! We were only able to do 9 of the 50 gazillion in the house (kidding, there’s only 20+) but we chose to do everything in the front of the house first since those are the rooms we are currently utilizing. The windows that were in the house were original and from the 40’s. Drafty as hell and some of them even had plants growing in/through them. The windows look AMAZING and we’ve even been able turn on our equally as old A/C unit and not worry about a crazy expensive utility bill. I definitely selected the energy efficient window panes and white trim and the difference is incredible both on the inside and outside of the house. The remainder of the windows we have to replace are in rooms that we have big reno places for anyway or are interior (K’s grandfather did a few additions to the house back in the day and some of windows actually open into another room instead of outside).

Since we had the windows installed, we were able to rip down the crappy blinds in the master bedroom. Instead of putting new ones up I installed curtain rods and bought black-out curtains. Best purchase ever! I love absolute darkness when I sleep and these make afternoon naps so much better hahaha. 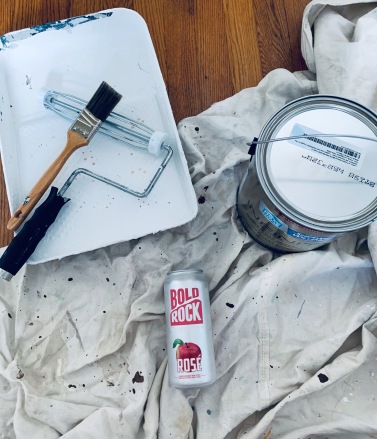 The only other room I have been able to paint and complete is the side room that connects the living room and kitchen. I primed the walls ages ago but took a long time selecting the paint color. This is another room that doesn’t see a ton of light, despite it having a window so we wanted a lighter color without just selecting white. We also don’t have a specific use for this room right now so I was able to play around and put some leftover furniture in it. Our bar cart is still stored in here since it’s close to the kitchen but we also do most of our drinking/hanging out in the living room. I also moved our second floor-to-ceiling bookshelf in and shifted my rocking arm chair into the corner. I originally had it placed in the living room by the fire place but K hated how small adding something to that corner made the room seem. Now I have my own little reading nook/coffee spot that I share with the cat 🙂 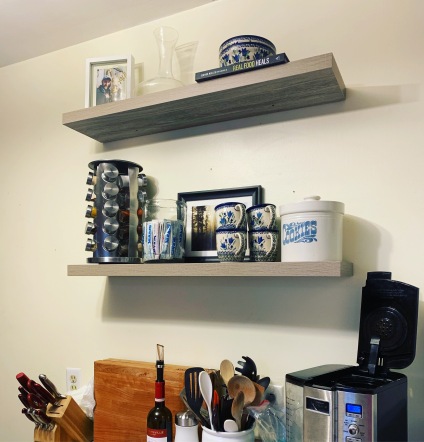 Other minor things include adding floating shelving to the kitchen to get more counterspace available, and paint the mantle and attached bookshelf in the living room white (why was everything painted shit brown??!).

Landscaping wise, we still have a ton of work ahead of us. K has been working on getting rid of weeds and bamboo and other unnecessary crap but having limited use of his right hand has stalled his progress (pin in his finger comes out TODAY!!). I did add a pot of lavender to the front porch to spruce up that area and to test my skills on actually planting something. So far I haven’t killed it!

Next up on our agenda (budget pending) is a dishwasher and a new front door and frame. We need all new appliances in the kitchen but that’s another room that needs to be completely gutted and redone. The fridge and oven are useable so those can wait for now but the dishwasher is not and I am so over doing the dishes. I’m not even supposed to be doing them because K says I “do them wrong and suck at it” but he hasn’t been able to do them with the whole hand injury crap (with that pin coming out though, my dishwashing days are numbered!! yesssssssss). K also needs to finish covering holes and sanding the remaining walls so we can get the rest of the rooms painted, but all that was put on hold with the hand injury as well. Hopefully those few things can be accomplished this year because next year our big money expense has to be a new HVAC system. 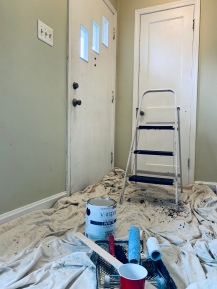 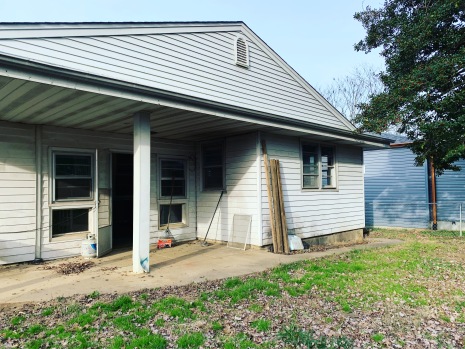 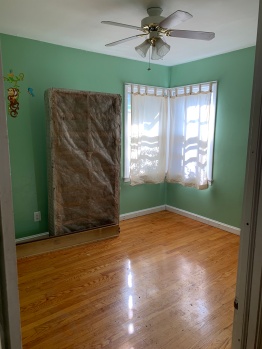